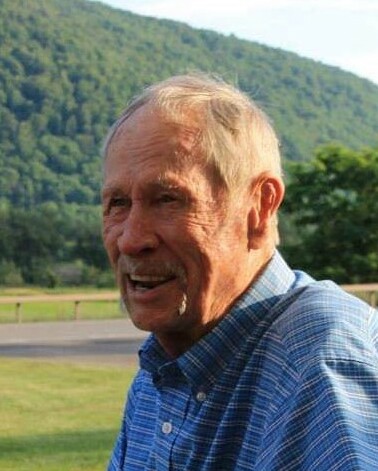 Dick was born on July 27, 1923, in Grand Gorge, he was the son of the late Frank and Lucille Sutton.

He joined the Civilian Conservation Cor at the young age of 16.  In May 1943 at the age of 18, he enlisted in the US Army, serving his country during WWII, stationed in Central Europe, Normandy, Northern France and Rhineland Germany, when he was honorably discharges from the Army in December 1945, he had served in 4 campaigns and honored 4 decorations and citations.   He was a member of the Grand Gorge American Legion.

Dick worked for the D&H Railroad before and following his military service, he also worked road construction in the Binghamton area driving truck.

In 1948 he married Edna (Louise) Clark of Grand Gorge.

Dick moved his family to Putnam Valley in 1958, where he worked as superintendent on a 3000-acre estate solely preserved for wildlife. Alongside four other officers, Dick volunteered his time as a special conservation officer for 12 years.

Moving to Stamford in 1965, he worked for Delair Enterprises, owned by William Murphy, maintaining the estate and horse farm for 17 years.

Dick worked at Stamford Community Hospital as maintenance Engineer.  He was athletic groundskeeper for Archibald Field and the school playing fields as well as custodian for the basketball games for 17 years.  Richard also served as crossing guard for the village.

Dick was an active member of the Stamford Fire Department.  He was a founding member and assisted in the organizations of the Emergency Squad, serving as Captain.  He also served as a Delaware County Fire Coordinator for 7 years, was a first aid instructor and continued to teach EMT courses for NY State.

His greatest passion was the love and respect of nature, being and avid hunter and passion his knowledge down to his sons and they became to share in the same love as they lived by example.

He was a self-taught photographer and enjoyed taking photos of animals in their nature habitat, birds, scenery and was often the family photographer.  His photos can be seen throughout the area in magazines, including a prize-winning photo displayed at Epcot Center in Florida.

In his later years, Dick would sit quietly on his deck watching the animals come and go, listening to the birds and feel the warm sun on his face, He was a true outdoorsman in many ways.

Besides his parents, Dick was predeceased by two children: April and David; and a sister: Mary Sutton Dawson.

Friends and relatives are invited to call on the family from 10-12AM on Saturday, January 7, 2023 at the MacArthur Funeral Home, 15 Buntline Drive, Stamford, where a celebration of life and full military honors will be held at 12Noon with the Rev. Dottie Morris.  Burial will take place in the spring at Stamford Cemetery.

Please visit www.macarthurfh.com to share a condolence with the Sutton family.