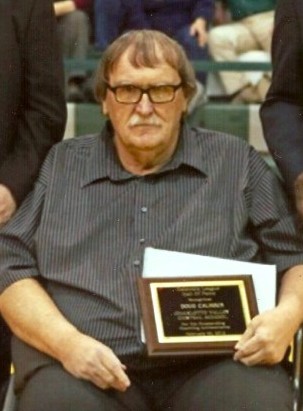 Douglas was a teacher’s aide and coach at Charlotte Valley Central School in Davenport from 1975 until his retirement in 2009.  Over the years he coached soccer, baseball and basketball at Charlotte Valley.  He was also elected to the Delaware League Coaches Hall of Fame.

He enjoyed playing softball and played in several local leagues in Stamford, Oneonta, Delhi and Worcester, including pitching in the Nationals.  Doug also coached Soccer in the Broome Co. League.

Besides his parents, He was predeceased by a brother: Duane Calhoun.

In addition to his family, Doug leaves behind a legacy of humility, determination, and service.  Legally blind in one eye, Doug’s determination led him to become a standout soccer goalie at SUNY Cobleskill, where he held the shutout record for many years.

While always respectful and appreciative of the past (including a love for Oldies music), he invested his life in the future by mentoring countless children and youth.  He shared his love for people through his love of sports and the life lessons sports could teach.  As a coach, he taught the importance of teamwork, sportsmanship, dedication, and pride.  He taught his players, by example, to put their whole heart into each personal workout, practice, and game.  He empowered his players to reach beyond their physical limits and other’s expectations, and he stressed the significance of being a part of something larger than themselves.  As advisor of the Charlotte Valley Varsity Club, he worked tirelessly to help youth make memories on and off the court.  He loved to celebrate and recognize others’ contributions and accomplishments and recapture the “Glory Days” by coordinating alumni games and reunions for teams and players from Charlotte Valley’s rich history.

Outside of CVCS, he served as the summer recreation director for many years, and volunteered coaching countless soccer clubs, often combining kids from different schools in order to make a team.  He viewed sports as a way to bring people together, regardless of ability level or background.

Doug was a lifelong contributing member of the Davenport community.  He joined the Davenport Volunteer Fire Department in 1972.  He volunteered for several community events such as the Memorial Day Parade, Fireman’s Field Days, and several youth baseball and soccer events.  Most recently, Doug coordinated the sporting events for the highly successful Davenport Bicentennial celebration.

A time of fellowship to celebrate Doug’s life will be held from 2-5 pm on Saturday, January 26, 2019 at Charlotte Valley Central School, 15611 State Highway 23, Davenport. Private burial will be held in the spring at Davenport Cemetery.

Memorial contributions can be made to the Calhoun Family Memorial Scholarship at Charlotte Valley Central School.  This award will recognize students who actively participate in sports, church and community activities.

Please visit www.macarthurfh.com to share a condolence with the Calhoun Family.