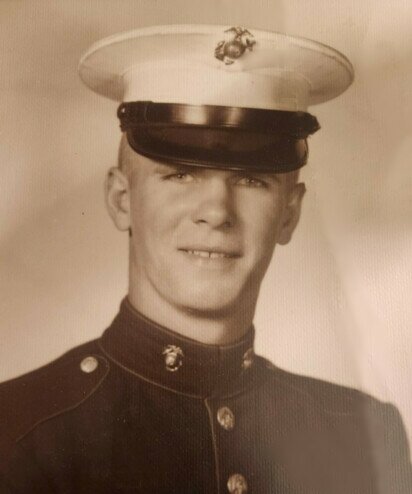 Frank Walter Bovee Jr., our beloved Father, Husband, Brother and Grandfather, and longtime resident of Delhi, went to be with his loving Savior on December 12, 2022 at the Albany Medical Center in Albany N.Y.

He was the son of the late Frank and Gertrude (MacFarlane) Bovee.  Frank was born on March 18th, 1934 in Norwich N.Y., graduating from Norwich High School in 1952.  He proudly served in the United States Marine Corps enlisting in 1953 until his honorable discharge as Sargent in 1956.

After serving his country, he came to Delhi and became a Scoutmaster.  Scouting was a significant part of Frank’s life and he enjoyed mentoring many young men as they progressed through the scouting program.  He joined the Boy Scouts of America at the early age of eight years old, being honored with many awards throughout the years and received recognition from Troop 33 in 2018 for over 70 years of scouting service. He truly enjoyed his time as Grand Marshall in the 2010 Delhi Parade commemorating the 100th anniversary of the founding of the Boy Scouts of America.

When Frank was faced with a challenge, he would always strive to find a solution and succeeded.  He did so much for his family, children and community members and was always cracking a joke and kept us smiling.  While he was known by those he helped he wanted no recognition and would prefer to serve  without others knowledge.

Frank married the love of his life, Carol Bovee in 1962 and they recently celebrated their 60th wedding Anniversary.   He will be greatly missed by his daughters, Brenda (Dale) Mertz and Pamela (Alan) Hilliar, his 2 grandchildren McKenzie Carroll and Ethan Hilliar and his sister Susan Bovee Miller.   Frank is predeceased by his brothers John W Bovee, David F. Bovee and James L Bovee and his sister Donna Herrick.

Frank was a pillar in his community and led a life of service and was an active member in his church.   He was well loved and respected by his family and many friends.  If he wasn’t rescuing someone with his locksmith skills, you might find him plowing out the church driveway or serving coffee at the Delhi Diner.

He founded the Delhi Sesquicentennial’s celebration in 1971 and was the owner of the Delhi Paint & Paper Store.   He was Superintendent of the Woodland Cemetery in Delhi for 40 plus years, and responsible for reconstructing burial lot records that were damaged over many years.   He would repurpose mower and machine parts to upkeep maintenance and save money for the cemetery and did the digging, covering and cremation burials.

Frank was a Life member of the Delaware County Historical Association and enjoyed the collection, preservation and dissemination of historical knowledge and information about the life of people in Delaware County New York as well as his own family.

He was recognized for his contributions to the community in 1993 receiving the DeWitt Clinton Masonic Award for Community Service.  He was a valuable member to the Delhi Community as Chairman of the Town Assessors for several years, Past President of the Delhi Chamber of Commerce as well as a Life Member of the American Legion.  He will be incredibly missed by all who knew and loved him.

Please visit www.macarthrufh.com to share a condolence with the Bovee family.