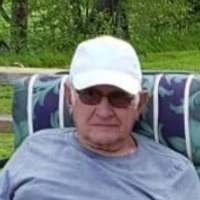 Mr. Bull proudly served in the US Air Force from 1956 until his honorable discharge in 1961.

Douglas was a welder by trade and worked for various local businesses including AGWAY, Western Auto, Amphenol, Mirabito and Dellwood Foods.

Doug was recognized as being the oldest owner/operator of a tractor pulling sled in the United States @ the National Convention in Ohio recently.

Doug was also the organizer of the “coffee club”. This consisted of several community members that met every morning to discuss local and national politics and drink a lot of coffee. Although not all issues were resolved, a lot of laughter could be heard.

Doug played volleyball for the Air Force traveling team and continued playing in various leagues until in his 70’s.

He was also active community member in the Catskill Mountain Antique Engine and Machinery Club and the DeLancey Water Board.

Doug was well known for his ability to make and fix anything.

Doug loved and was very proud of his family and never missed an opportunity to horseplay with his grandchildren and later was fortunate to carry this on with great grandsons. He never grew old and was in every occasion for a good time.

Douglas served 20 years on the Delaware County Fair Board, where he helped organize the tractor pulls and volunteered as an electrician for many years. Doug’s hobbies became Jean’s hobbies and as a team they spent the entire summer and fall @ local fairs, tractor, and truck events through NY State, New Jersey, and Pennsylvania. He had the vision and welding expertise to design and build his own weight transfer sled, which put Delaware County on the map.

Besides his parents, Douglas was predeceased by his siblings: Raymon Bull, Jr and Barbara Schliff.

Doug got his last wish of a peaceful –quiet-passing of doing exactly what he enjoyed.

Calling hours will be held from 4-7PM on Thursday, September 15, 2022, at the MacArthur Funeral Home, 134 Main Street, Delhi.  A private memorial service and burial will take place at a later date.

Please visit www.macarthurfh.com to share a condolence with the Bull family.