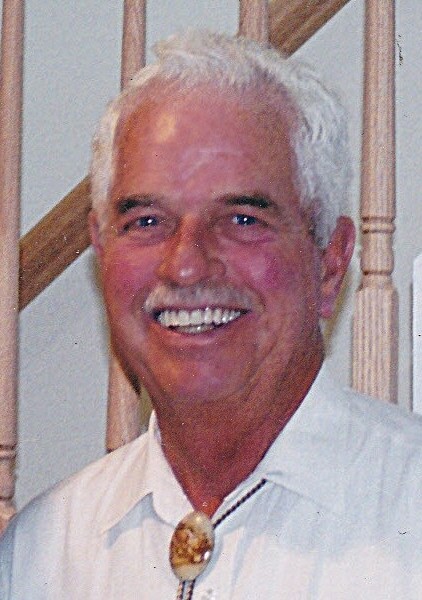 J David Callaghan, a resident of North Merrick for over 65 years and a resident of Summit and Jefferson, New York for over 50 years, died on Sunday, March 27, 2022, at his home in Jefferson. He was surrounded by family at his passing.

Dave, the ninth– born of nine children of Joseph Francis Callaghan and Mildred Angelita Carney, was born on December 16, 1930 and spent his youth in Freeport and Rockville Centre, New York.

After Holy Redeemer Parochial School, he attended Chaminade High School and later graduated from Mount St. Charles High School in Woonsocket, Rhode Island. He was a self– motivated and conscientious student and played football, hockey, and track.

He served during the Korean Conflict in the New York National Guard, and later in the U.S. Air Force from 1950 to 1953.

In the early 1950s, he met Sally Lee Wisler – they married in 1954 and had eight children. He continued his education at St. John’s University (while also working full– time) and graduated with full honors and distinction.

He was employed by Baldwin Bellmore Federal Savings and Loan (later renamed Beacon Federal Savings) for over 40 years, eventually serving as Senior Vice President and Treasurer. Dave was a member of the National Association of State Auditors, Comptrollers, and Treasurers and served in several capacities during his tenure.

He was a member of the Knights of Columbus (at St. Agnes RVC and then Sacred Heart in N. Merrick), a CYO and Merrick Bellmore Little League Coach (both boys and girls), a member of the Holy Name Society, and a communicant, usher and lector at Sacred Heart Catholic Churches in both North Merrick and Stamford, New York.

Despite his large family, demanding career, and varied outside interests, Dave and Sally always found time to be involved in their eight children’s sports, academics and social lives, and introduced them to the pleasures of life at Bush’s Golf and Cottages in Pennsylvania,  on Bear Gulch Lake in Summit, NY and “being on the mountain” in Jefferson. .

Dave was a brilliant and complicated man, (a constant Mr. Fixit), who relished both the domestic tranquility of solitude sans kids and pets (although we were always amazed to find him petting the family dog in private) and his rich social life – exchanging ideas with his many diverse friends and neighbors in restaurants, on golf courses – especially at “the club” –  the Stamford Golf Club –  and in his religious retreats and councils. He was an avid amateur genealogist and was always interested in the history of his family in Cavan, Offaly, and Tyrone, Ireland, and St. John, New Brunswick, Canada.

Another of Dave's loves was language – word play and good writing in any genre – and he engendered that love in his children: board games, crosswords and cryptoquotes were a family obsession. Jeopardy and Wheel were his constant meal companions. . He was an avid and daring swimmer: swimming the length of Reynold’s Channel from Pt. Lookout to Long Beach and holding the distinction as one of the youngest children to go off the high board at the Jones Beach pool (at six years of age). He loved chocolate and teaching his grandchildren about horse racing at Saratoga and golf.

Most importantly, Dave was a devoutly religious man, who embraced, practiced, and lived a true and honorable Catholic life. He said, “I have 8 “only” children, and they are all unique, and I love them the same.”

We remember Dave saying, "Are you watching your time?" and “There is a little bit of good in the worst of us, and a little bit of bad in the best of us, so it ill behooves any of us to judge the rest of us.”

Friends and relatives are invited to call on the family from 2-5PM on Sunday, April 3, 2022, at MacArthur Funeral Home, 15 Buntline Drive, Stamford, NY 12167. A Mass will be celebrated on Monday, April 4 at Sacred Heart Church, 27 Harper Street, Stamford, NY. Burial with full military honors will be held at Calverton National Cemetery in Riverhead, NY at 2:30PM on Friday, May 27, 2022.

Please visit www.macarthurfh.com to share a condolence with the Callaghan Family.

Get Directions
Friday
27
May