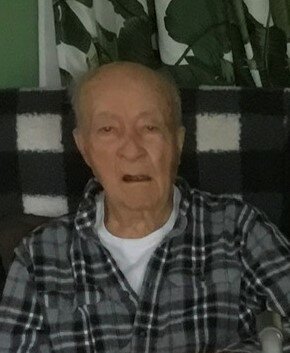 Born on December 26, 1927 in Edelman, PA., Paul was the son of the late Albert Herman and Florence Julia (Wanner) Kuck.

Mr. Kuck proudly served in the US Marine Corps, joining in 1946.  He was honorably discharged as Staff Sergeant in 1952.

He lived in Hudson County, NJ, until recently moving to Hobart with his wife to live with family.

Paul was self-employed for many years, he owned and operated a local hardware store and then had a vending route, both in Hudson County, NJ.  He later worked as a security guard for Hudson Co.

He was a proud member of the American Legion Post 33 in North Bergan, NJ.  Paul also served as a Deacon in his Methodist Church.

He enjoyed gardening, studying natural and herbal medicines, puttering in his workshop and picnics.

Paul is survived by his wife: Margarete Kuck of Hobart; children: Rosita Carey and Donald Joseph; along with several grandchildren, nieces, nephews and cousins.

Graveside services with full military honors will be held in the spring at Gerald BH Solomon Saratoga National Cemetery in Schuylerville, NY