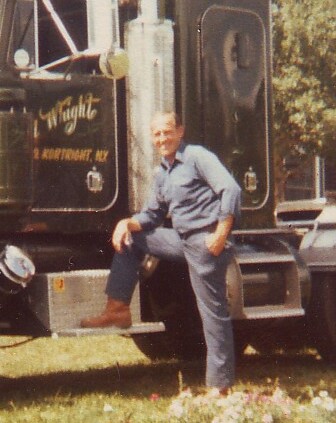 Obituary of Sidney A. Wright

Sid was born on March 15, 1947 in Harpersfield, NY, at the old parsonage, to Harry and Lena May (Irwin) Wright.

He loved his children and their families very much.  He strove to do his very best teaching his work ethics and values to them.   He was in the work force for over 48 years. At 16 years of age, he hauled sawdust.  A few years later, he started to work for West Nesbitt Feeds in West Harpersfield, delivering feed to farms.  In 1968, he began to pick up bulk milk for Prospect Dairies, of Stamford, NY.  He achieved his Class 1 driver’s license for tractor trailer and hauled milk products to Hi Health stores until they closed the plant in the 1970’s.  Sid bought his own truck and went on to transport bulk milk for Elmhurst Dairy to their facility in Queens, NY for a number of years.  Sid was a former Highway Superintendent for the Town of Kortright and served in that position for several years. He owned and operated Area Refuse Service from 1994 to 2000 when it was purchased by Casella Waste Management .  Sid also worked for Riddell Brothers of Oneonta, NY as a farm pick up driver until they sold the business in 2005.

Sid was a volunteer fireman for the Stamford Fire Department for many years and was twice a Fire Commissioner.

Sid is predeceased by his parents, two sisters, Celia Wright and Martha Murati; and a brother, Robert Wright.

There will not be any calling hours or service.  A private burial ceremony for family members is planned for spring.