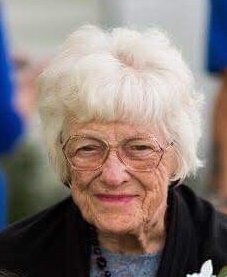 A 1945 graduate of Grand Gorge Central School, she was known as “Terry” by everyone. She was married to Albert P. Vamosy, Sr. on September 29, 1946 at St. Phillip Neri Church, Grand Gorge, a union that lasted 62 years until his passing in 2009. Together, Teresa and Albert purchased a dairy farm on Odell Lake Road in the Town of Harpersfield and operated the dairy of registered Holsteins for 39 years.

Terry was a 4-H leader, joined the Catholic Daughters of the Americas, in which she was an officer for over 40 years. She was a member of Utsayantha Grange #1313 and later the Col. Harper Grange, where she was an officer in both. She was also president of the Mt. Jefferson Home Demonstration Unit, an officer in the Stamford Central School PTA, member of the Stamford School Alumni Association, Regent of the Abigail Harper Chapter of the DAR and participated and attended many farm organizations with Al. She was also a member of Sacred Heart Church in Stamford.

She loved to read, garden, go round and square dancing with Al. She also enjoyed birthday and holiday dinners with family, carrying on the Vamosy family traditions of Easter breakfast and Christmas Eve dinner.

Terry worked alongside Al for 20 years on the farm and then went to work at Stamford Central School to help put her children through college, working at SCS for 32 years and was known as “Chief” in the later years.

Besides her parents and her husband, Terry was predeceased by a brother: Richard Moore; sister: Shirley White; and infant daughter: Christina and her last baby son.

Friends and relatives are invited to call from 4-7PM on Wednesday, October 23, 2019 at the MacArthrur Funeral Home, 15 Buntline Drive, Stamford. A Mass of Christian Burial will be celebrated at 11AM on Thursday at Sacred Heart Church, Stamford, burial will follow at Sacred Heart Cemetery, Stamford.

Please visit www.macarthurfh.com to share a condolence with the Vamosy family.

Share Your Memory of
Teresa "Terry"
Upload Your Memory View All Memories
Be the first to upload a memory!