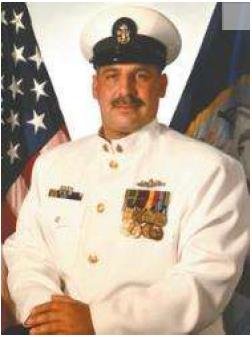 Share this Tribute:
Share Obituary:
Share Your Memory of
Chief Petty Officer Richard
Upload Your Memory View All Memories
Be the first to upload a memory!

Richard Howard Loucks, Jr. was born on January 19, 1967 in Stamford, New York to Richard Howard Loucks, Sr. and Shirley Mattice. Together, they raised Richard in the town of Bloomville. He did his schooling as a student at South Kortright Central School. He later earned a higher education from Columbia College.

In November of 1985, at 18, Richard enlisted, as a Hall Tech, in the United States Navy. The following year, he married Cheryl Leale, becoming a step father to her son. This was the beginning of a very long union, lasting more than 20 years, through the whole of Richard’s military career. Together, they had 4 children of their own, 3 sons and 1 daughter.

From 1985 – 2005, Richard completed 20 years of Honorable and dedicated service to the United States Navy. Preeminent in his field, he rose to the rank of Chief Petty Officer, earning various accolades for a cascade of achievements, recognized throughout his career, such as his participation in capturing over 9 tons of cocaine, in a single bust. The 5th largest in U.S. history. Chief Loucks was an extraordinary sailor, and his service will be forever appreciated.

Richard was later married to Suzanne Warner and they remained married throughout the remainder of his life.

Richard is preceded in death by his brother, Russell Loucks, though he leaves a host of family and friends to celebrate his life, carry on his legacy, and keep his memory alive: his father and mother, Richard and Shirley Loucks; his two sisters, Debbie Martin and Karen Hall-Green; his former wife and their children, Cheryl Loucks: Chad Loucks and wife, Bridget; Ryan Loucks; Travis Loucks and wife, Brittany; Brielle Dougherty, and husband, Nathan; his stepson, Joseph Bower, and his wife, Marie; his wife, Suzanne, and two stepdaughters, Amanda Warner-Van Stone and Maya Bradshaw; his 13 grandchildren, several nieces and nephews and extended family.

Richard was a lover of hunting, fishing, grilling, the outdoors, and music, but most of all, he loved his family and was a great father, an excellent role model, and hero to many. He offered himself to anyone who was in need. He has touched so many people over the span of his life. Richard Howard Loucks, Jr. will forever live in our hearts!