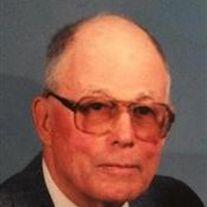 DELHI William F. Cash, 94, of Delhi, boarded the 1041 Heaven Express on Thursday, January 19, 2012 at home in Delhi. He was born on September 19, 1917 in Cincinnatus, the son of William C. and Mary (Fisher) Cash. He married Esther R. Coulter on July 23, 1942. A 70 year resident of Delhi, Bill was employed as a farmer, milk tester, and worked in maintenance at Delhi College for 25 years. Engineer of the "Cash Railroad," generations of children visited his home to see him demonstrate the hobby he loved. Bill was a 70 year member of the Delhi Grange 1192 and held membership in the Delhi Masonic Lodge 0439. He was also a member of the United Ministry of Delhi and a charter and former member of the Delhi Fire Department and Emergency Squad. He is survived by his wife of 69 ½ years, Esther R. Cash; a son, William A. and Charle Cash of Delhi; a son, David L. and Joan Cash of Delhi; a daughter, Lynda A. and Mike Beadle of Clayton; grandchildren, Kelly and Jamie Rotter of Delhi, Scott Cash and Val Gomogda of Lake in the Hills, IL, Sharon and Mike Pietrantoni of Bloomville; William C. Cash of Delhi, Eric Beadle of Clayton, Mickey and Joe Barrett of Blossvale; 10 great grandchildren; sisters, Lillian and Louis Lurenz of Walton, and Audrey Cohen of Kauneonga Lake; and several nieces and nephews. He was predeceased by his parents; brothers, Anthony Cash, Arthur and Madeline Cash, Milton and Charlotte Cash; and a brother in law, Myron and Irene Coulter. A memorial service will take place at 11 a.m. on Saturday, February 4, 2012 at the United Ministry, Delhi, with Rev. Martha Vink officiating. There will be no calling hours. Burial will take place at the convenience of the family. In lieu of flowers, donations are asked to be made to Catskill Area Hospice, 116 Main St, Delhi, NY 13753 or the Food Pantry at the United Ministry, 46 Church St, Delhi, NY 13753. Arrangements are by the MacArthur Funeral Home of Delhi. Condolences can be left online for the family at www.macarthurfh.com.
Print