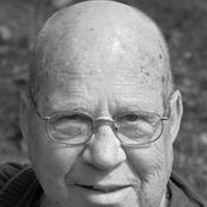 DELHI Lloyd Clinton Georgia, 82, of Delhi, passed away on Monday, January 23, 2012 at O'Connor Hospital in Delhi. He was born on March 24, 1929 in Treadwell, the son of Clinton and Bessie (Best) Georgia. He met Janet Effie Dietrich at a square dance in the old Delhi Town hall when they were 16. They married October 24, 1948. Lloyd worked for over 25 years for Milton Ward on Cold Spring Farms, Spring Lake. He retired from SUNY Delhi in 1993. Lloyd and Janet spent their winter's in Clewiston, FL at a campground where they met many good friends from the US and Canada. He was a member of the Delhi United Ministry and an associate member of the Community Presbyterian Church in Clewiston, FL. Lloyd is survived by six children, Gail (Roger) Miller of Hamden, Bruce (Linda) Georgia of Richford, Linda (Steven) Kannenberg of Arizona; Dawn (Kevin) Flannagan of Alabama, Sharon (Jay) Ricci of Rochester, and Carolee (Jan) Vink of Lansing; he leaves 13 grandchildren, Thomas (Gretchen) and Stephen (Shawnon) Morganstern; Chris Miller (Krystle Knapp); Jennifer (Mike) McGrath; Scott Georgia; Georgia (Kyle Hale), Jillian and Jake Ricci; Julia, Marshall and Meredith Bovee; Vinna (Chris) Norris; and Danielle Clark; 8 great grandchildren, Simon, Cassie and Phebe Morganstern; Noah and Claire McGrath; Ayden Clark; Caitlin Norris; and Elsa and DJ Morganstern. He was predeceased by his wife Janet; his parents; brothers, Glen and Robert; and his aunt Grace Georgia. A memorial service will be held on Friday, January 27, 2012 at 6 p.m. at the United Ministry Church, Delhi, with Rev. Martha Vink officiating. The family will receive friends prior to the service at the church from 5 to 6 p.m. Burial will take place at the convenience of the family. In lieu of flowers, donations may be made in Lloyd's name to the Delhi United Ministry Memorial Garden Fund, PO Box 111, Delhi, NY 13753. Arrangements are by the MacArthur Funeral Home, Delhi. Condolences for the family may be left online at www.macarthurfh.com.
Print