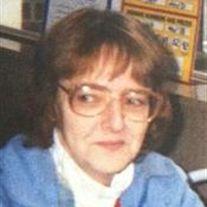 Obituary of June A. Haines

DELHI June A. Haines, 63, of Delhi, died Wednesday, February, 29, 2012 at the Countryside Care Center in Delhi. She was born on November 27, 1948 in Delhi, the daughter of Alfred and Louise (O'Brien) Smith. She married Geoffrey Haines on June 27, 1992 in Delhi. A life-long area resident, June was employed by O'Connor Hospital in Delhi for more than 20 years as a Dietician. She spent time traveling across the 48 states and Canada with her husband Geoff who worked for Anderson Trucking and drove an 18 wheel flatbed. She enjoyed spending time with Geoff at the Delhi Diner where she was affectionately known as "Junebug." June is survived by her husband, Geoffrey Haines of Delhi; a daughter, Dawn and William Conklin of Hamden; a son Philip Wangner of Poughkeepsie; grandchildren, Cynthia Gallagher, Kristen Wangner, Brian Gallagher, Heather Voehl; and several nieces, nephews and cousins. She was predeceased by her parents and an infant brother, Raymond. Calling hours will take place on Monday, March 5, 2012 from 10 a.m. to 12 p.m. at the MacArthur Funeral Home, Delhi. A memorial service will immediately follow at 12 p.m., Monday, also at the funeral home, with Rev. Nancy Truscott officiating. Burial will take place in the spring in Woodland Cemetery, Delhi. Contributions in her memory are asked to be made to Catskill Area Hospice or the Delhi Emergency Squad. Condolences may be left for the family online at www.macarthurfh.com. Arrangements are by the MacArthur Funeral Home of Delhi.
Print