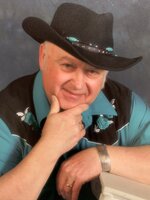 Born on May 19, 1944 in Delhi, Fred was the son of the late Fred and Blanche Cleveland. He was a 1963 graduate of South Kortright Central School.

Fred worked as a piano tuner since 1968. In 1971 he and his wife Ruth founded the Eighth Note Music Store in Oneonta.  He tuned pianos for many well-known artists, including Aretha Franklin, U2, Dave Burbeck, Ferranti and Teicher and Yoko Ono’s piano (that John Lennon wrote “Imagine” on.  He also was Justice in the Town of Kortright 17 years. He was an avid golfer, bowler and his love of music followed him everywhere he went.  Fred also played keyboard with several country bands.

Besides his parents, Fred was predeceased by his daughter Corinne.

A celebration of life will be held at 1PM on Sunday, January 9, 2022 at the Otsego Christian Academy, 353 Main Street, Otego, NY 13825 (former Otego Elementary School) with Mitch Mullenax officiating.

Contributions in memory of Fred should be made to the Otsego Christian Academy.

Please visit www.macarthurfh.com to share a condolence with Fred’s family.