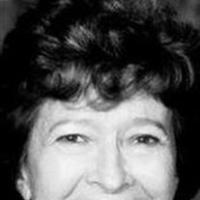 DELHI _ Velma J. Clark, age 80, passed away on Monday, April 18, 2011, at Robinson Terrace Nursing Home, after a long illness. She was born Frances Lena Gilbert on Oct. 1, 1930, in Delhi, the daughter of Richard S. and Dorothea (Rice) Gilbert. At 6 months of age, she was given to Percy F. and Myrtle (Ferguson) Hitt, who arbitrarily changed her name to Velma June Hitt. From the age of 9, she was raised solely by Percy Hitt, who was a wonderful caring father, whom she loved dearly. Velma graduated from Delaware Academy in 1947, attended the Austin School of Beauty Culture in Albany, and then owned and operated her own beauty shop for the next five years. In 1949, she married Burton F. Clark and helped established the family construction company, Burton F. Clark, Inc., where she served as secretary/treasurer and financial manager. In 1956, Burton and Velma decided Delhi needed a motel. Velma drew the plans, Burton cut the logs to be milled and did the site work and the Buena Vista Motel opened for business in April of 1957. It was her total labor of love. Velma entered Delhi Ag & Tech in the fall of 1958, in the newly established division of hotel management. At the time she was raising two small children, was operating the Buena Vista, was bookkeeper for Burton F. Clark, Inc., and still graduated in 1960, with a perfect 4.0. For the next 15 years, life evolved, the children grew as did both businesses. In October 1973, a serious automobile accident altered her life forever. She never again served either business in any capacity and the Buena Vista was sold. After a three year recuperation period, Velma turned to a new venture, working for R.B. Decker Advertising for 14 years, serving as business manager from 1987 to 1990. Velma has been an involved community volunteer and leader her entire life. She was an active member of the Delhi Business and Professional Women for 30 plus years, serving a two year term as president. She chaired the Queen's contest for the County Dairyland Festival in 1961, and chaired Delhi's Sesquicentennial in 1971. She served on the Board of Directors as the League of Women Voters was formed in Delhi, was past Matron of the Order of Eastern Star, was a 60 year member and a nine year trustee of the First Presbyterian Church, served on the Board of Directors of the Delhi College Alumni Association, was a former member and past president of the O'Connor Hospital Board of Directors and was a former member of the Friends of Bassett Board. Velma served three terms as Town of Delhi Supervisor, during which time she was a founding member of the Coalition of Watershed Towns. She is a former member of the Executive Service Corps (ESCOD), served on the Board of Catholic Charities of Delaware and Otsego Counties, was a member and treasurer of the Honest Brook Music Festival, served on the Board for the Delhi Senior Housing and was an active member of the Delaware County Historical Association. Velma also served on the Board of Directors of the Delaware National Bank of Delhi for 28 years, serving as Chairman of the Board from 1994 until her retirement in 2002. In 1984, Velma was honored by the Delhi Business & Professional Women as their Woman of the Year. In 1993, the Delhi College Alumni Association selected her for its Distinguished Alumna Award. The following year the Delhi Chamber of Commerce chose her as Citizen of the Year for her commitment to improving the Delhi Community and Delaware County. And finally, in 1996, the Delaware County Republican Committee honored her as their Republican of the Year. In whatever spare time she could find, Velma enjoyed bridge and playing golf. She spent many years accompanying her husband to horse shows and carriage drives and she totally enjoyed watching her grandsons play sports. She was a woman of tremendous faith, was honest to a fault, was a true friend and a wonderful wife, mother and grandmother. She loved to dance and she loved dogs. She was a true lady who had class. Velma is survived by her son, B. Scott Clark and his wife, Betsy; her daughter, Jacalyn E. Clark and her significant other, Lawrence T. York; grandsons, Christopher S. Clark and Sean R. Clark; sister-in-law, Marjorie Clark Conklin; and nieces and nephews. She is also survived by close family friend, Shirley Pyne-Decker. The family wishes to acknowledge the loving care extended to Velma during her stay at Robinson Terrace. Calling hours will be from 2 to 4 p.m. and 6 to 8 p.m. Friday, April 22, 2011, at MacArthur Funeral Home, Delhi. A celebration of Velma's life will be at 11 a.m. Saturday, April 23, 2011, at the First Presbyterian Church, Delhi. Memorial contributions may be made to the First Presbyterian Church, 4 Clinton St., Delhi, NY 13753 or Catskill Area Hospice, 1 Birchwood Drive, Oneonta, NY 13820. Arrangements are by the MacArthur Funeral Home of Delhi.